are unobservable random errors and

Typically for a regression problem, it is assumed that inputs

are given and errors are IID random variables. However, we now want to consider a setting where we sequentially choose inputs

and then get observations

are a martingale difference sequence with respect to the filtration

be the matrix of inputs and

be the matrix of outputs. Further we let

be the least squares estimate of

and also gives a rate of convergence.

are, respectively, the minimum and maximum eigenvalues of the design matrix

and if we assume that for some

Then whenever we have

is the Euclidean norm for a vector and for a matrix

. (Note that it is well known that

the maximum eigenvalue of

Outline of proof. The least squares estimate to the above regression problem is given by

. To prove the above theorem first note that

The inequality above we apply the Cauchey-Schwartz inequality. We bound

using the Sherman-Morrison formula. Specifically we will show that

is some positive increasing sequence. So since

which, with some linear algebra, can be bounded by

. Thus we arrive at a bound of the form

In what follows we must study the asumptotic behaviour of

. What we will show is

Proof. To prove this proposition we will require some lemmas, such as the Sherman-Morris formula. These are stated and proven after the proof of this result.

The Sherman-Morrison Formula states that: 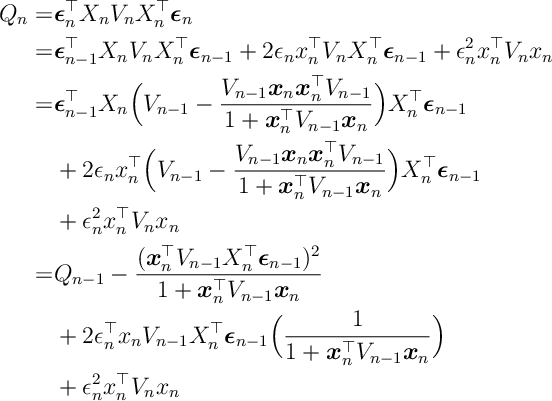 Thus summing and rearranging a little

Notice in the above, the first summation (before the equals sign) only acts to decrease

, while on the right hand side, the first term is a martingale difference sequence and the second term is a quadratic form.

In the second equality above, we use that

. Thus we have that

By Lemma 2 (below) we have that

Thus we have that

Proof. Recalling that the outer-product of two vectors

(Nb. This is matrix multiplication: each column is a constant times

and every row is a constant time

, so the dot product comes out.)

Using this identity note that

The following in some sense repeatedly analyses to the determinant under the Sherman-Morrison formula.

are a sequence of vectors and we let

Proof. First note that if

then, as was also in the Sherman-Morris formula

which should remind you of the derivative of the logarithm. (Also note that this tells us that determinant is increasing and that

.) If we apply this to the above sum and apply the concavity of the logarithm

is the product of all eigenvalues

This is based on reading: