This section is intended as a brief introductory recap of Markov chains. A much fuller explanation and introduction is provided in standard texts e.g. Norris, Bremaud, or Levin & Peres (see references below).

We highlight some of the key properties of Markov chains: how to calculate transitions, how the past effects the current movement of the processes, how to construct a chain, what the long run behavior of the process may (or may not) look like. We give an initial example to better position our intuition.

Below in Figure [Snakes_and_ladders], we are given a game of snakes and ladders (or shoots and ladders in the US). Here a counter (coloured red) is placed on the board at the start. You roll a dice. You move along the numbered squares by an amount given by the dice. The objective is to get to the finish. If the counter lands on a square with a snake’s head, you must go back to the square at the snakes tail and, if you land on a square at the bottom of a ladder, go to the top of the ladder. 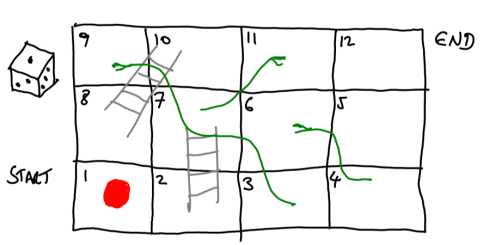 is a discrete time Markov chain. Two things to note: First, note that given the counter is currently at a state, e.g. on square

– is not effected by the path that was used to reach the square. I.e. This is called the Markov Property. Second, notice each movement of the counter from one state is a function of two pieces of information the current state and the independent random roll of the dice. In this way we can construct (or simulate) the random process.

be a countable set. An initial distribution

is a positive vector whose components sums to one. A transition matrix

is a postive matrix whose rows sum to one, that is, for

With an initial distribution

and a transition matrix

, you can define a Markov chain. Basically

determines the probability the process starts in state

gives the probability of going to

if you are currently in state

is a discrete time Markov chain, with initial distribution

The condition is often called the Markov property and is the key defining feature of a Markov chain or, more generally, Markov process. It states that the past

are conditionally independent of the present

. Otherwise stated, is says that, when we know the past and present states

, the distribution of the future states

is only determined by the present state

. Think of a board game like snakes and ladders, where you go in the future is only determined by where you are now and not how you got there; this is the Markov property.

The following proposition shows that the evolution of a Markov chain can be constructed from its the current state and an independent dice throw.

a random variable on

constructed with the recursion

The following proposition will be useful when we want to sum up a long sequence of rewards.

be a bounded function and for

is the unique solution to the equation

The following is an alternative formulation of the previous proposition.

be a subset of

be the hitting time on

There is a close connection between Markov chains and Martingales that we will want to use later when considering Markov Decision Processes.

is a Markov chain if and only if, for all bounded functions

is a Martingale with respect to the natural filtration of

. Here for any matrix, say