The Simplex Theorem suggests a method for solving linear programs . It is called the Simplex Algorithm.

If Step 2 follows Step 3, we need to calculate

. In other words, we need to apply operation

. We can break down Step 2 into the following routine 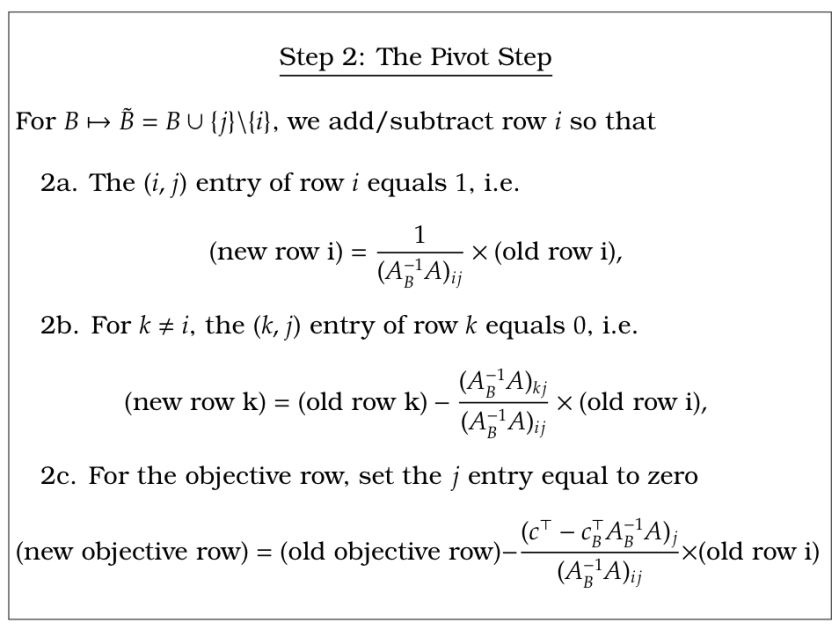 In addition, Step 3 can be expressed in terms of the Simplex Tableau in the following way. 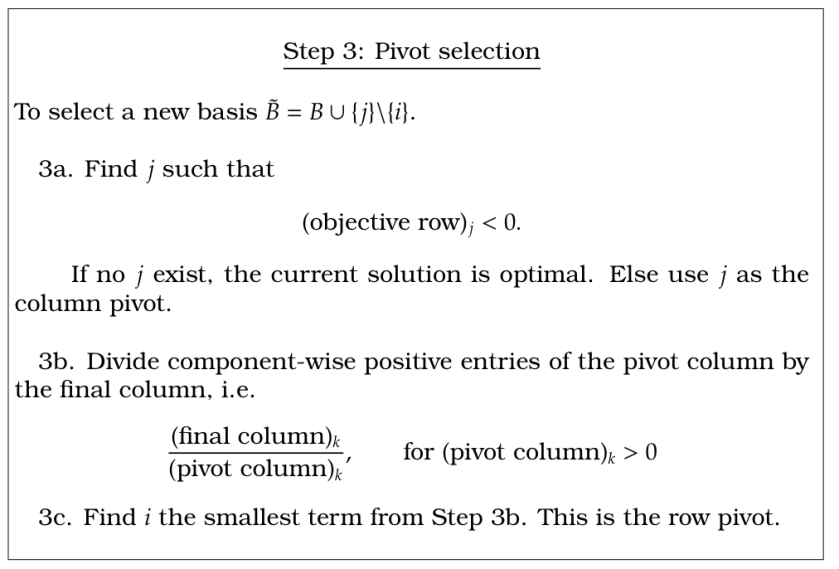 Let’s now go through a simple example in detail.

Answer 1. This is the same as

Let’s go through the steps of the algorithm.

Step 1: we find a basis. As we noted inequality constraints mean we can start with all slack variables in the basis.

Step 2: write out the simplex tableau:

, are starred and our current solution can be read from the final column:

Step 3: the reduced cost for both variables

respectively. Thus, we could pivot on either column. We decide to pivot on

is smallest we pivot on the second row. For book keeping, we place a box around the pivot. We now repeat to Step 2.

Step 2: For the matrix to be in the correct form, we must multiply and subtract the pivot row from all other rows so that the only non-zero entry in the pivot row is a

at the pivot. In this case, the pivot row is in the correct form (the pivot contains a

Step 3: The only negative reduced cost is for

. This gives the pivot column. The only positive term from Step 3b is from the first row; this is our pivot row.

Step 2: dividing the pivot row by

The reduced costs in the objective row are all positive. Thus, the current solution is optimal. Once again we read this solution from the simplex tableau by associating basis variables with the final column through the

’s in the identity submatrix. In particular,

and the value of the maximum is

We can make more general observations from our example, for the following optimization:

We consider the method of two stage simplex with the following example.

which, adding slack variables, is equivalent to this first problem

Observe that, unlike before, setting

does not yield a basic feasible solution. In particular, if

which are not feasible. So, we need to find a bfs to start from. The trick is to solve a different optimization problem whose optimal solution is a bfs for our original problem.

For example, we consider the second problem

Both problems have the same number of non-zero entries in a bfs, namely,

, this is then a basic feasible solution to the first problem: all the violated constraints are satisfied and there are the right number of non-zero terms. So we should solve this problem in two phases:

Phase I: Solve the second problem, where we added additional variables for violated constraints.

Phase II: Removing the additional variables we have a bfs for the first problem. We then solve the second problem.

So now we can solve this problem using the Simplex algorithm in two phases:

to be basis elements. So we need to multiply the 3rd row by

. So we need to subtract the first and second rows of the simplex tableau from the bottom objective row.

We now proceed to optimize the this tableau whilst treating the additional objective row as though it was just an additional constraint. 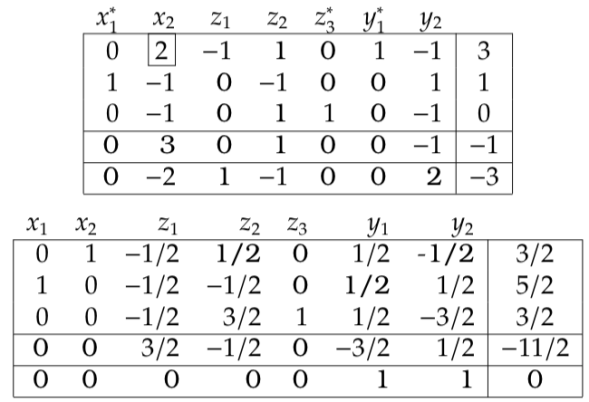 We are now at an optimal solution for the the first phase. In particular, we are at a basic feasible solution where

. We can now remove

, the bottom row and solve the second phase.

So we have now solved our original optimization problem. The optimal solution is

We continue our example from the last section. Here we solved, . We now notice we forgot a constraints

. So we want to solve

Our previous optimal simplex tableau was

But now notice, our current solution

is no longer feasible as

. We now wish to solve this problem by adding this constraint and its a slack variable to our tableau:

times the first row to the fourth puts the tableau in the correct form for our basis.

Our current basic solution has

. So our basis is not feasible for our primal problem ; however, the objective row suggests a dual feasible solution. Note below our slack variables in our , our tableau contained a negative identity matrix

We select a pivot on rows that maintains dual feasibility and increases our objective to a primal feasible solution i.e.

. We choose a row

for which primal feasibility is violated i.e.

. In our example, this is the

and the fifth column gives

, we pivot on the fifth column. . This gives the tableau

Our current solution is feasible and, as our pivot kept our objective row positive, our solution is now optimal. In particular,

Theorem 1. The extreme points of

are exactly the set of basic feasible solutions.

Proof. Recall that we assume each

is invertible. Thus for each basis,

there is a unique basic feasible solution (bfs)

, which contradicts the feasibility of

and so by uniqueness of bfs

is an extreme point.

that is not a basic feasible solution. Let

is not a basic feasible solution

points. So the submatrix

has linearly dependent columns, i.e. there exists a

is sufficiently small so that

are feasible and also

is not an extreme point.

Theorem 2. Any linear program with a finite optimum has at least one optimum at an extreme point.

Lemma 1. For a closed convex set

is a separating hyperplane, i.e.

, them an extreme point in

has an extreme point and every point in

Proof. We prove the result by induction on

is a closed bounded interval and the extreme points are the end points of the interval. Assuming the result holds for dimensions less than

, we prove the result for

has empty interior then

is a subset of an affine space,

and this space must have dimension of

would have a non-empty interior. In otherwords, if

, then problem is immediately reduced to the

is an extreme point then everything is trivial. So let’s suppose

is not an extreme point, in which case there exist an

are well defined because

is closed and bounded. It is also clear that

. Thus the applies to

be the hyperplanes respectively sepaarating

convex sets of dimension less than

. Thus by the induction hypothesis both

are a convex combination of the extreme points which exist in

respectively, which by Lemma 1 are extreme points of

is a convex combination of

is a convex combination of extreme points existing in

Now, we reduce the number of extreme points required to express

is an extreme point. If

are linearly dependent. Thus there exists

and because by definition

, there must exist some

maximizing this expression is zero in the sum

in now the convex combination of less than

can be expressed as the convex combination of

be the finite optimum to a linear program with objective

and feasible set given by polytope

defines a non-empty polytope of optimal solutions. We aim to apply Caratheodory’s Theorem. Since

is closed and bounded for all

, is well defined and attained. Thus, as

is a closed bounded set and so

is a closed bounded non-empty polytope of optimal solutions, which by Caratheordory’s Theorem must contain an extreme point. Applying Theorem 1 twice – once for

– this optimal point must be an extreme point in