Here, we have the update equations

Notice if we take

then any sequence of distributions

can be realized by the above recursion.1 Except special cases, we cannot calculate the integrals above when the state space

is infinite (or simply large).

However, we can approximately sample from the required distribution and use that as a proxy. We can then update with the same equations as above replacing the continuous

which is achieved by taking

More precisely, SMC does the following:

It is worth noting that the resampled RVs

and thus are a random subset of

. Since we then apply transitions

we should, in general, recover

distinct points. We assume that it is easy to sample from

. Further notice, the algorithm is always dealing in ratios of the distributions

. Thus we do not have to specify normalizing constants for these distributions if we do not know them (which is often the case in the world of Bayesian statistics). A final important point, is that although we assume

to be a state in the set

. We could allow it to be the set of previous states

. This is what we do in the hidden Markov models (discussed below).

Roughly why this works. Although we can say more precisely why things work out for this algorithm, let’s sketch out why it works. Suppose that

is a good approximation of

. So much so that we assume that

). Notice that from infinitely many resamples from

We can apply the strong law of large numbers to each of the two sums above. Notice that

. Thus applying to , we see that

Thus we see that in the limit where

is large, we should be sampling from the correct distribution.

As an example SMC can be used for Hidden Markov models. Suppose that

us a Markov chain with

. Suppose that we receive observations

as a function of

I.e. the distribution of

is conditionally independent of

when we condition on

Like with the Kalman filter we wish to calculate 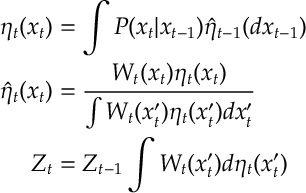 If we are given

, and if the state space of our Markov chain

is finite, then we can calculate all the distributions above. However, this is not possible when

is not finite and instead we can for instance use Sequential Monte-Carlo which we define next.

We now prove the convergence of SMC (in

norm). Just like Monte-Carlo the standard deviation error goes down at a rate

. We require the weights

to remain bounded by some value

Theorem. For all bounded continuous

is a positive constant.

Proof. The proof proceeds by induction applying the same bounds that we proved from standard Monte-Carlo and self-normalized importance sampling (cf. and Proposition [MC:SNI]).

So the result holds at

and we prove that it holds at time

Note that the term in square bracket is bounded by

. Thus, recalling that the

norm is defined by

In the final inequality above, we now that

We analyze the term , noting that the term is the same when we take

Thus for we have

The first term in follows by the same argument that we used to derive . The second term follows by our induction hypothesis applied to the function

. Thus, applying the above inequality to (and ), we see that

Thus we see that the require bound holds at time

This completes the induction step and the proof.