We explain why certain distributions arise naturally as the limit of coin throws.

that takes at most two values is called a Bernoulli random variable. We assume (unless stated otherwise) that these values are zero or one. So

ones in a row and

zeros in a row is

. The number of sequence with

has a Binomial distribution, and we write

Ex 2 [Bernoulli to Geometric] Consider a sequence of Bernoulli RVs

be the index of the first

in this sequence. Show that

has Geometric Distribution, and we write

We now consider some limits of Binomial Random Variables.

Ex 3 [Binomial to Poisson]Consider a sequence of Binomial RVS:

Above the term in square brackets goes to one and

Poisson distribution and we write

Ex 4 [Geometric to Exponential] Consider a sequence of Geometric RVS:

Thrm [Binomial to Normal] If

has a normal distribution and write

This is a special case of the central limit theorem, and involves several steps.

Ex 5 [Binominal to Normal] If

Cancelling and dividing by

Applying this also to the denominator gives the result.

In our case the probability corresponds to the sum 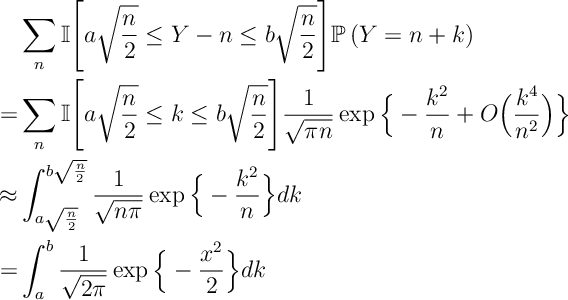