Let’s explain why the normal distribution is so important.

(This is a section in the notes here.)

Suppose that I throw a coin

times and count the number of heads

The proportion of heads should be close to its mean

it should be even closer. This can be shown mathematically (not just for coin throws but for quite general random variables)

and variance bounded above by

We will prove this result a little later. But, continuing the discussion, suppose

. We see from the above result that

is getting close to

. Nonetheless, in general, there is going to be some error. So let’s define

For this we can analyze the variance of the random variable 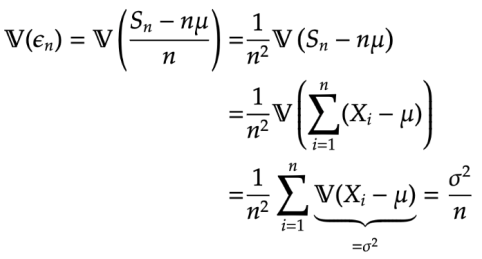 Thus the standard deviation of

. Given this we can define

has mean zero and its variance is fixed. I.e. the error as measured by

is not vanishing, but is staying roughly constant. So it seems like there is sometime happening for this random variable

, a question is what happens to

. The answer is that

converges to a normal distribution.

This is a famous and fundamental result in probability and statistics called the central limit theorem.

is a standard normal random variable.

Given the discussion above the Central Limit Theorem, roughly says that